The winners of this year’s Physics World Cup were honoured in Bad Saulgau on Thursday. The results of the preliminary rounds determined the winners of the gold medal. They were Iran, Singapore and South Korea.

In the Final on Wednesday, in which each team presented one more problem, South Korea came out on top and was named “Winner of the Tournament”.

On Friday morning the 28 teams and those accompanying them travelled to Stuttgart where they visited the Daimler plant and the Mercedes Museum. On Sunday morning the 300 visitors will then embark on their journey home.

The World Physics Cup will take place in Taiwan next year. 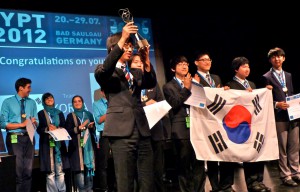 On Thursday evening the winning teams of the Physics World Cup were honoured in Bad Saulgau. The teams coming in first, second and third were all awarded the gold medal. South Korea was named “Winner of the Tournament” having achieved the highest number of points in the Final. 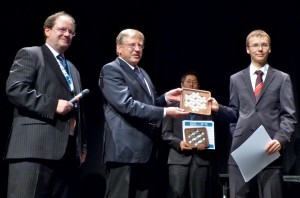 Alan Allinson, President of the International Young Physicists’ Tournament (IYPT), and District President Hermann Strampfer presenting the silver medal to  the German captain, Michael Kern from Biberach. According to the regulations teams coming in fourth to eighth receive the silver medal.

The gold medal winners of the Physics World Cup 2012. The teams from left to right are Iran, South Korea and Singapore. 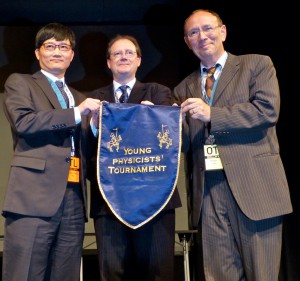 Handing over of the pennant to Taiwan, the next year’s IYPT host.