Moderate climate, rainfall throughout the year. Extreme temperatures are rare. July has a mean temperature of 11ｰ C at night and 23ｰ C during the day. Probability of rain is 50%.

German sockets are compatible with two types of sockets: Type F, also known as CEE7/4 or safety plug and the narrow Type C, CEE7/16 or Euro plug. The voltage is 230 at 50 hertz.

The rights of young persons are defined in the Children and Young Persons Act. A young person is defined as anyone under the age of 18. The following is a short summary of the restrictions regarding the consuming of alcohol and tobacco as well as youths visiting restaurants and discos.

Alcohol
The consumption of spirits (hard liquor) in public is prohibited to all young persons as is the sale and passing on of spirits to those under 18.

The purchase and consumption of other alcoholic beverages such as beer, wine and sparkling wine by persons under 16 is prohibited.

Tobacco
Public consumption and purchase of tobacco products by persons under 18 are
prohibited.
Smoking is generally not allowed indoors like in restaurants and coffee houses, schools, public buildings.

Restaurants
Young persons under 16 may visit restaurants and public houses between 5:00 and 23:00 only if accompanied by a parent or guardian or a person with legal responsibility for that young person or if they consume a meal or drink. Young persons over 16 are prohibited from being in a restaurant or public house between the 24:00 and 5:00 without being accompanied by a parent, guardian or person with legal responsibility.

Discos
Persons under the age of 16 are permitted into discos only if accompanied by a parent or guardian or a person legally responsible for them. If unaccompanied, they are prohibited from entering discos. Young persons over 16 are permitted into discos without a parent, guardian or person legally responsible for them until 24:00.

Currency and means of payment

Cash payment is always possible. 100, 200 and 500 \ bank notes are used seldom and are not always accepted in payment especially for smaller purchases.

The EC card is the most common form of cashless payment in Germany. There are no fees when paying with the EC card within the EU monetary union. The EC card can also be used to withdraw money at Automatic Teller Machines (Cash points). The fees for this differ from bank to bank.

Payment with credit card is not so very common in Germany. Credit cards are accepted in large department stores restaurants or petrol stations. It is possible to withdraw cash at many ATMs with credit cards the fees differing from bank to bank.

ATMs (Cash points) can be found in the entrance of every bank. In Bad Saulgau most of the banks are on the south side of the old town / new center as well as on the marketplace. 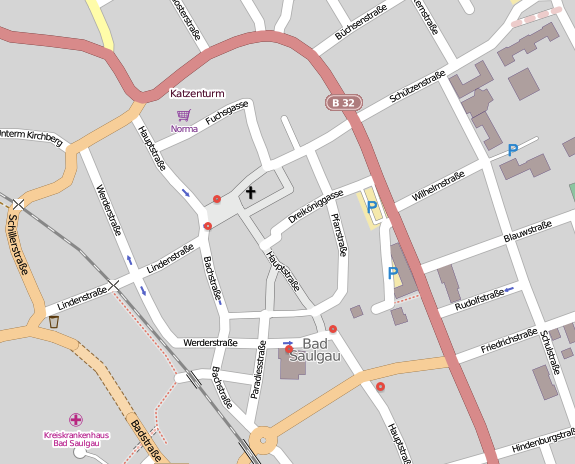