You should be well prepared, be able to function as a team, be disciplined and have stamina, be able to react quickly and be able to give presentations in English competently. To be successful at the IYPT you need more than just above-average skills in physics. This competition is recognized as the most challenging one worldwide for pupils.

The tournament lasts one week and the oral competition goes over several rounds. 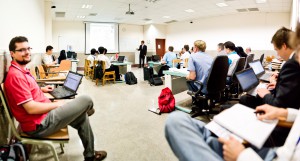 The task is the same every year: there are 17 complicated scientific problems to which a five-member team presents the solutions in English and defends in verbal “physics fights” against the competitors. There are always three teams: the “Reporter” team, the “Opponent” team and the “Reviewer” team. The first team does a presentation, the second team tries to find weak spots in the solution by asking probing questions, and the third team takes the role of the referee. Only three of the over 20 teams reach the final round. Further details regarding procedure…

Preparation for the competition usually requires several months. Approaches and strategies have to be discussed, dismissed and thought out again, and experts and researchers  have to be consulted. Test facilities have to be conceived and constructed, often with the help of craftsmen. In spite of all this preparation there is almost no team which is able to solve all of the problems. That is why the team “captain” is so important. It is the captain who decides on what tactics are going to be used so that the competitor doesn’t find the team’s weaknesses. It is only after several competition rounds that the winner is selected.