Course of the tournament

The tournament begins with a drawing which forms groups of three teams each. In case the number of teams is not divisible by three then one or two groups of four will be formed.  The groups then simultaneously carry out the first “selective fight” whereby the teams change groups so that different teams compete against each other.

Structure of a fight

A fight is divided into three or four stages depending on whether three or four teams are participating. During one stage every team alternately takes on the roles of

Course of a stage

A so-called stage is a part of a physics fight. It lasts approximately 45-55 minutes and proceeds without a break. There are breaks of between five and 15 minutes between the individual stages.

Every phase described here has a specified maximum duration. Adherence to these times is closely monitored. A special screen showing a graphical representation of how much time is left in the current phase is available. 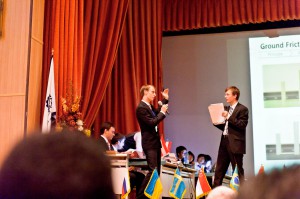 After the Opponents’ criticism there will follow a discussion between Reporter and Opponent. During this time the Reporter has the opportunity to respond to the criticism and the Opponent can make renewed criticism. Here the third team, the Reviewer team, joins in and poses questions as well. After a short preparation time the Reviewer team has the job of emphasizing any positive and negative aspects of both of the other teams.

At the end it is the Reporter’s turn to make a few closing remarks. And finally, jurors have the chance to ask questions of all three teams. After that the jurors will judge the teams’ performance at the that particular stage. In fights of four teams there is also the observer team in addition to the reporter, opponent and reviewer. The observer team, however, does not participate actively, but merely observes. In the following stages the teams exchange roles until every team has had every role.

The three best teams out of the five Selective Fights will take part in the Final. 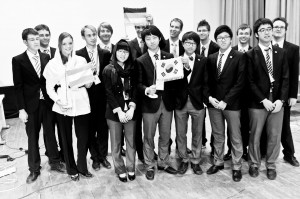 The procedure here is exactly the same as in the Selective Fights. There are only two minor differences:

Each invited country sends a team with five pupils from secondary schools (not universities) with one pupil (Captain) leading the team during the Physics Fights. Each team is accompanied by two teachers (known as Team Leaders). 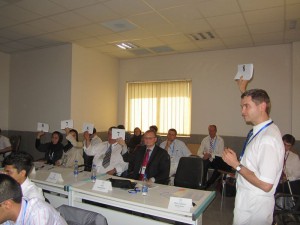 The jury is nominated by the host country whereby the accompanying teacher will serve on the jury but not in the groups in which their own teams are competing. The jurors give marks whose weighting differs according to the problems.