28 teams from around the world are fighting for the title

21.07.2012  The International Young Physicists’ Tournament (IYPT), the so called Physics World Cup, opened in Bad Saulgau on Saturday morning. It is taking place under the auspices of the German Physics Society (DPG), Bad Honnef and is being organized by the Student Research Center South Wuerttemberg (SFZ), Bad Saulgau.

About 500 guests were invited, among them the participants from 28 countries and those accompanying the teams, representatives of companies that support the competition financially as well as with material and staff, and  state and local politicians, school directors and many scientists from cooperating universities.

The tournament, in which teams made up of five members compete against each other in 5 rounds or “physics fights”, will last until July 26. The task: presenting and discussing physics research projects which thestudents have solved. The competition takes place in English but native speakers are not necessarily at an advantage. It is the team that presents a convincing solution to the given problem and is able to defend it rhetorically well in English that gets the points. Knowledge of physics, tactical skill, teamwork and rhetoric are the decisive factors in this complex tournament for students between the ages of 16 and 19.

Many companies are already now lamenting the lack of well-trained young talent. This trend will most likely continue in the coming years due to the demographic changes taking place. This is an important reason why many globally operating companies support this tournament. Emphasizing how important education is especially for a country like Germany, Minister for Education and Research, Annette Schavan said, “Investing in education, science and research is the key to progress and prosperity. Physics plays a central role in this. In order to be successful physics requires cooperation across national borders and subject boundaries. This internationality and the willingness to work together characterize the Physics World Cup in Bad Saulgau. Young people have the opportunity to establish contacts and network among each other and this makes for a very good basis for their future careers in science.”

Also contributing to the ceremonious atmosphere set by the Minister’s speech, were the welcoming speeches of Bad Saulgau’s mayor, Doris Schröter, the head of the local organizing committee, Rudolf Lehn, and the President of the IYPT, Alan Allinson, who also opened the tournament. Physics professor Metin Tolan from the Technical University, Dortmund proved to the audience that physics can also be fun. For years he has been researching the “Physics of James Bond” and, tongue-in-cheek, explores the question of whether the spectacular stunts are possible from a purely scientific point of view.

Germany has been taking part in the tournament, whose venue changes every year, since 1995 and always with representatives from the Student Research Center (SFZ) which was founded in 1999 after the German team had won the gold medal for the third time. Rudolf Lehn, the head of the SFZ  was always there. He says, “The IYPT is an extraordinary competition with extraordinary challenges. I know of no other student competition in science and technology that so comprehensively fosters the subject and communicative skills. The young people active in the IYPT are network savvy, possess argumentative skills and are able to think on their feet. They also excel in giving presentations and can deal with conflict. These young problem solvers from around the world are meeting here at the IYPT to compete against each other in a scientific and friendly atmosphere.”

The organizers are expecting costs to exceed € 400,000 raised solely through contributions from companies, foundations, local and regional public institutions as well as the Federal Ministry of Education and Research.

The participants of this year’s German team come from three Länder: Clemens Borys, 19, and Paul Hege, 16 from Kassel in Hesse, Lars Dehlwes, 16,from Erlangen in Bavaria, Tobias Schemmelmann, 18, from Lörrach and Captain Michael Kern, 17, from Biberach all in Baden Wuerttemberg.

The team competition was conceived in 1979 at the State University of Moscow which was sole organizer until 1993. A German team participated for the first time in 1995 in Poland and won the first prize. After the German team won the tournament again in 1999 the idea of founding a student research center took shape. 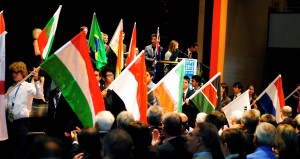 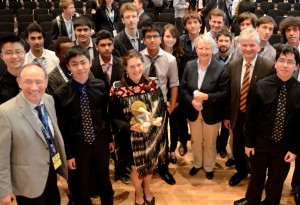 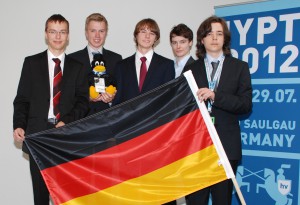 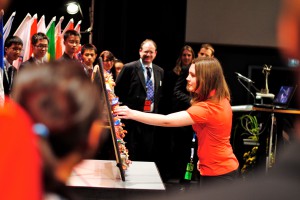 Yulya Peregud is drawing the fight number for belarus.