problems. and why there’s 17 of them. 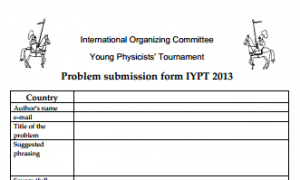 At the core of the IYPT there are the 17 problems that the teams work on for almost a year. They have been repeatedly credited as source of ideas for laboratory tasks, thematic activities in schools, graduation research projects, or even everyday physics teaching.

As a participant you might be fascinated by some of them, irritated by others and some will definitely lead to long weekends and a bit of frustration. But have you ever thought about where these problems come from?
Is there a holy book of problems (*) where we can look for them? Is there a large committee of experts spending weeks doing experiments to come up with new things to investigate?

Well, it’s a bit of both actually. Each year the members of the international organizing committee (IOC) are asked to submit ideas for problems. At the IOC meeting, which takes place during or past each year’s IYPT, there’s a discussion on the problems to select for next year and eventually a decision. Sometimes this takes long, other times it takes very long to reach a conclusion. To make sure that we have new high quality problems, even after all these years, last year we decided to introduce a new process:
A pre-selection committee was formed to improve our selection process and we opened the submission of ideas to everyone using a submission form on our website . Details of the new process are documented in the EC minutes from last October.

The committee did some impressive work: The report Ilya has submitted to the IOC is 60 pages and they worked through 89 proposals from 18 countries.
So, what was their selection based on? What makes a good set of problems? The report sums it up as follows:

If you’re interested in some background material for this year’s problems, go check out the kit.

As every year, I’m excited to see what the 17 problems for the next year will be. Why 17 you might still ask yourself: An experienced IOC member once explained it to us in the following way: “Well,… You see, 16 would be too few, but 18 would be too many.”

(*) Some former problems have been inspired by a book that comes quite close to this notion – The Flying Circus of Physics.